16 hours, 12 rides, 4 churros and 1 cancelled fireworks show…I can now honestly say that I have spent an entire day at Disneyland!

And boy was it a long day! My sister and I had purchased a park ticket for our mom last Christmas that was quickly expiring so my little family of four finally decided on a Saturday in December when we could all go (which was not an easy feat let me tell you)

I was worried about crowds since we were going mid-December during Christmastime. I was expecting 2 hour wait lines and loads of tourists – and I was happily surprised! 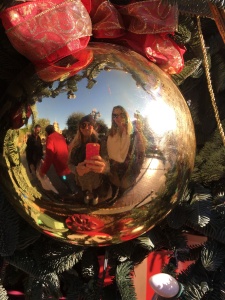 We arrived at the gates at 8:16 am after we had checked into our hotel we booked for the night. We headed right for Space Mountain to get a FastPass before they were gone for the day.

I should probably mention that I go to Disneyland at least once or twice a month, but my parents hadn’t been in years so it was awesome to see them so excited about seeing everything again.

This was also the first time I had ever eaten breakfast inside Disneyland and it was scrumptious! I HIGHLY recommend the cinnamon roll french toast – yum! We made our way through Disneyland and finally decided to head over to California Adventure. My mom was particularly excited about seeing Cars Land as she hadn’t been there since it was built.

Even the Cove bar wasn’t too crowded which was what I was really looking forward to 😉 After 8 hours or more in Disneyland, you deserve a drink.

We stayed in California Adventure until the sun set and then it got a little chilly. For anyone who hasn’t seen it yet, Disneyland recently introduced an all-new parade called Paint the Night. If you haven’t yet, YOU NEED TO SEE THIS PARADE! I am not a fan of the current Soundsational parade they currently have and Paint the Night blows it out of the water. It is similar to the old school Electrical Parade, only performing after dark with bright lights and glowing costumes. The music is awesome too!

After the 11:30 pm parade, we decided it was time to make the trek back to the Paradise Pier hotel. This specific hotel has a cool beach vibe/theme so even the tree was decked out accordingly! It was right within walking distance to the Disneyland Hotel as well so it was pretty neat to be able to see the OG Disney sign right outside our hotel. Oh and did I mention we were randomly picked as ‘Family of the Day’ and got a room upgrade with a view of all of California Adventure?!

At the end of the day, we had rode 12-13 rides during our 16 hour Disney day. I probably won’t be doing a full day there for a long, long time after this, but it was totally worth it! My parents had a blast and we got some great pictures throughout the day.

People always ask me why I like Disneyland so much…There are so many reasons but it’s so crazy to me that a theme park built 60 years ago can still hold so much excitement for all ages! And hopefully 60+ more to come!

Aloha Madz was founded by self-proclaimed beach bum and Southern California resident Maddy aka Madz. With a love of photography, writing and social media, Maddy put her efforts into creating a blog that would share it all!